Double in Emsdetten 2019 ended with a new World Record!

59 athletes at the start line, 44 at the finish line and one world record – that’s the result of the fourth Double Ultra Triathlon in Emsdetten/Germany. 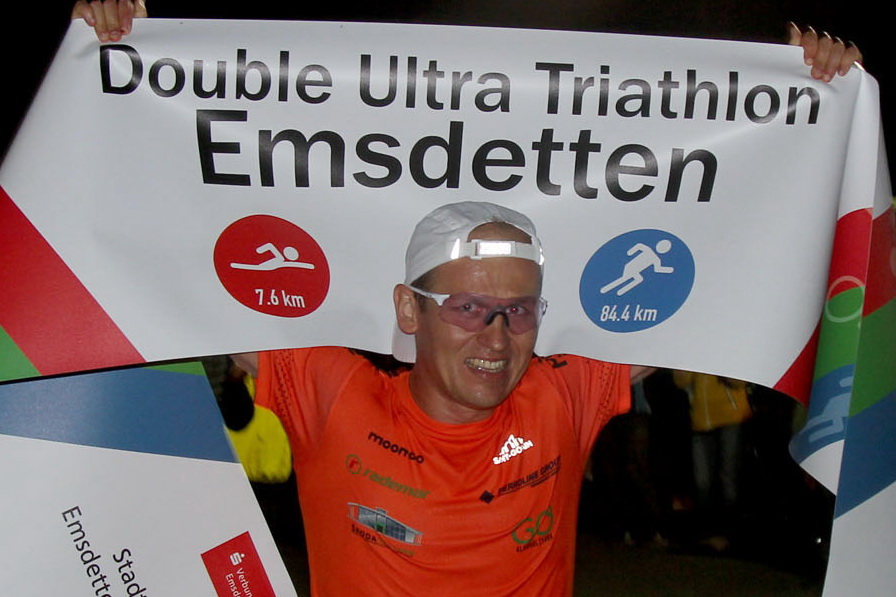 The race provided nonstop excitement through to the end, especially whether the Estonian ultra athlete Rait Ratasepp would break the world record or not. In the women's field, too, an exciting battle for podium places emerged in the course of the race.

While the women’s race had a clear start to finish victory for the German Simone Pagels, the men’s race favorites Andreas Six from Austria (first out of water), Henning Olsrud from Norway (IUTA World Cup Winner 2018) and Rait Ratasepp from Estonia (second placed in 2017) took the lead in the first third of the cycling part. Surprisingly, the German Nils Sannmann joined the leadership group, but had to give up the race after the first marathon.

At about 13 hours of racing, Ratasepp was the first who changed from his bike to running shoes. He did the 82 laps on a partially newer and faster track, in 10:47:15h. His mammoth task was now to run the 84.4 kilometer in about 6:42 hours, which means 3:21h per marathon – almost insoluble. He ran the first ten kilometers in 44 minutes, with every hour the tension increased.

After 50 of 60 loops, Ratasepp was slowing down. In this situation, he told his supporters that they should not inform him about his current status and that he would do anything to achieve the near impossible yet.

It was Sunday, 2:40 in the night: Volunteers, spectators and even many athletes interrupted their race to gather around the finish line. And than the unbelievable happened. Rait was able to gain speed during the last ten laps and crossed the finish line at a time of 19:42:57h – a new world record! The crowd applaud frenetically. By the way, 6:40:58h was one of the three fasted run for a “Double” in the 34-year history of Ultra Triathlon.

In the women’s field Pagels left the pool after 2:48h in first place and did not give up her lead until the end. With also the best time on the bike and the second best time on the run track the finished at a little bit more than 31 hours early Sunday afternoon. She could hardly believe her luck: "I've never won anything in the past," she explained.

More interesting was the fight for 2nd and 3rd place. Local heroine Jenny Wehmschulte got off the bike just under an hour behind Jennifer Schlosser, also from Germany. Wehmschulte (32:15:13h) caught up steadily, but in the end Schlosser (32:04:18h) could defend a narrow lead of 9 minutes to the finish line. For all three it was her first Ultra Triathlon.

As usual in Ultra Triathlons, the last finisher, Luigi Tricoli from Netherlands, received the most attention and was honored by the winner Ratasepp in the finish area for his great performance. A perfect weekend ended with the graduation in the evening.

The "Double" was a great success and we hope that there will be another edition after the rebuilding phase of the swimming pool in 2022.