Brutal Events: Did I mentioned that I finished a Deca?

There have been a few attempts now to spread the world of Deca into the UK. This was the latest event organised by Claire Smith and her Brutal team and saw the now customary selection of events for athletes to select from. The IUTA classified events were the continuous Deca and Quin. 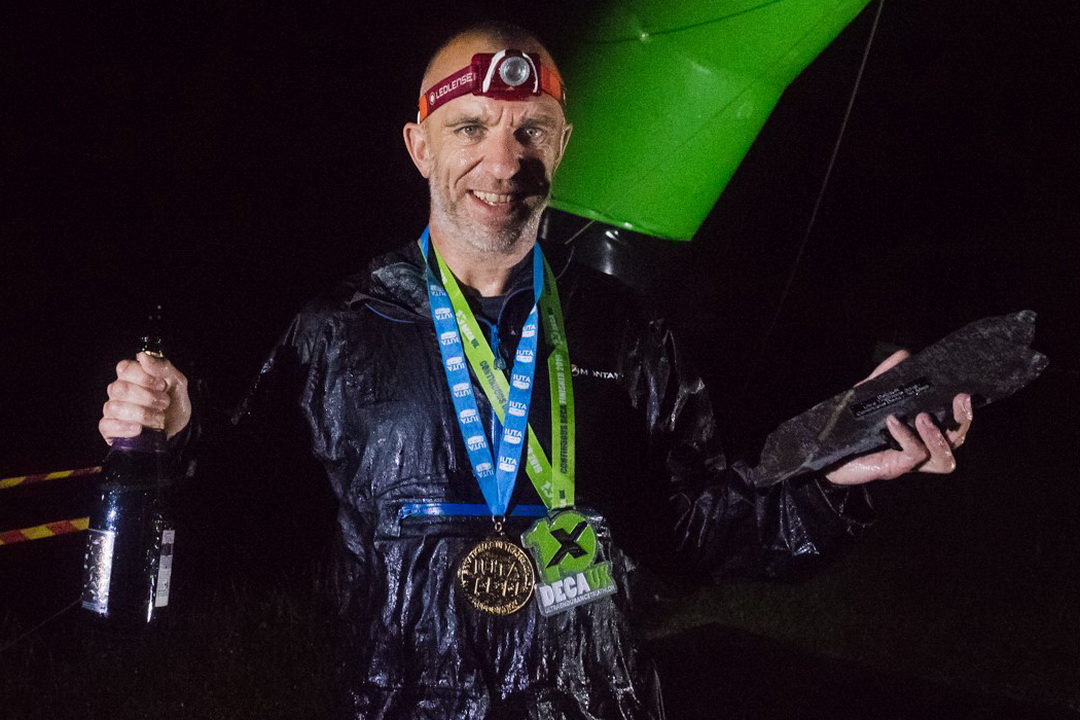 The Deca saw 11 male athletes toe the start line at 7am on the 21st July at Allerthorpe. They were swimming in a 25metre pool at Ampleforth, a former monastery. The Frenchman Simon Perradeau shot off into an early lead, but it soon become apparent that he was not going to sustain the pace. We witnessed the usual aches and pains of a 38km swim, but for once the puke bucket was not much in evidence. Lars Meier Jensen of Denmark was the first man out of the water in 14 hrs 13 mins and after a quick hug with his new found deca bromance friend, Matt Dales , he departed with support man Christoffer on the one hour drive to the bike/run venue at Allerthorpe.

The first 5 finished the swim quite close together and all set off on the 8 mile open road bike circuit in the late hours of the night, apart from Matthew Pritchard, who opted for a good sleep before starting the bike. For the most part, the athletes had reasonable weather for cycling, but did have to endure one day of temperatures in the 30s ( measured at 41 degrees out on the tarmac) and one or two thunderstorms. The same leading 5 of Lars, Matt Dales, Matt Pritchard, Mark Dodgson and Simon Perradeau were rarely more than 10 laps apart on the on the 139 lap course. They were all cycling at roughly the same speed and it was interesting to observe that the thing that separated them was the length of the breaks.

The Deca really is about continuous motion. The leading 5 all took between 103 and 111 hours for the bike section. The other 5 remaining competitors were all now focussed on beating the 12 day cut-off for the event.

The run course consisted of 228 laps on a grass course, including a few up and downs through a small wooded areas that caused quite a few issues with slippery mud, especially during the night hours. The leading group of 5 were once again never far apart from each other. Mark Dodgson kept such a consistent pace with his walking poles and eventually started to creep away from the other 4. He was the only man to beat the 10 day barrier, finishing in 235 hours, 20 minutes. Mark was really suffering towards the end …… and no surprise… his foot is now in plaster as he was diagnosed with a stress fracture a couple of days after the race.

The next 4 all finished within 6 hours of each other, with Lars 2nd in 245 hours, followed by Matt Dales one hour later, Matthew Pritchard in 248 hours and Simon Perradeau in 251 hours. Almost a day later Dave Kershaw and Maarten de Jong succeeded in beating the cut-off. The remaining 3 of Graham Smedley, Martin Curran and Zach Franklin sadly were unable to beat the cut-off for various reasons as we all witnessed the emotion and pain that go hand in hand with the Deca

In the Quin, there were just the 3 starters, Austrian Norbert Luftenegger and 2 British ladies, Suzy Coates and Jane Scott. Suzy was first out of the swim in 7.09, but the other two were not far behind. Once onto the bike, Norbert pulled further and further away as he used the race as preparation for Doubles in Buchs and Leon. He completed the bike in 46 hours and 4 minutes and the 5 marathons in 38 hours and 38 minutes for a total time of 94 hours 11 minutes.

Suzy and Jane kept plugging away, supported in great style by outstanding support crews to finish in 137 and 140 hours respectively. Suzy was another who appeared on crutches a couple of days later, suffering from another stress fracture, this time in the shin. Once again, it was a joy to observe these 2 ladies conquering the pain and savouring the elation of achievement at the finish line.

The 10 in 10 days race was not an IUTA event, but attracted 8 starters , all from the UK and all first timers. Matt Pritchard’s brother Adam was in the lead for the first 3 days but suffered on the day of extreme heat and eventually had to be admitted to hospital, where he was diagnosed with a nasty case of gastro-enteritis. This left 4 men and 3 ladies to complete the race. Gavin Barron was steady throughout and won the men’s event in 149 hours and 3 minutes , followed by Irishmen Mark McGowan and Chris Maguire ( 151 and 164 hours respectively) with Will Denny 4th in 164 hours.

As far as we know there had previously only ever been 3 other female finishers of 10 in 10 day events. This race remarkably saw that number doubled , with Maria Greaves leading the way in 161 hours 16 minutes, followed by Kate Jayden and the outstanding Annettte Burrows, who smiled her way through the 10 days despite a bike crash which left her with badly bruised ribs on Day 2. Maria’s race was made absolutely complete by being proposed to on the finish line by boyfriend and incredible support crewman Darren. She said "YES"!